They don’t say “money is the mother’s milk of politics” for nothing.

If you’re serious about winning a race or advancing your cause, you’re gonna need to raise money…unless you’re independently wealthy and plan to self-fund your entire operation.

Problem is, most people would rather get a root canal than ask people for money.

But the biggest problem behind this fear is they just don’t know how to do it.  Especially when it comes to asking for big checks from major donors.

And that’s our main topic at this Thursday’s FREE Campaign Boot Camp workshop in Las Vegas.

Why should you attend?  Because I’ve written a book on this subject…literally.

Copies arrived from my publisher this week and everyone who joins us on Thursday will receive one…FREE.

In it, you’ll discover… 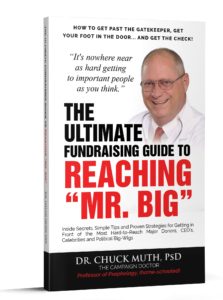 And although the primary focus is fundraising for campaigns, ANYONE who finds themselves in a position of raising money for ANY cause will benefit from this week’s workshop – including folks trying to raise money for charitable organizations like the Boys and Girls Club or even your kid’s Little League team.

In fact, using the “shock and awe” strategies outlined in the book, my teenage daughter and her friend raised over $15,000 for a three-week school trip to Europe a couple years ago…in less than 90 days!

I’ll detail exactly how they did it Thursday night.

In addition, we’re going to talk a lot about the #1 KILLER of fundraising letters and emails…and exactly what to do to make sure you never ever, ever, ever send one of those out.

Then you need to be at this week’s FREE Campaign Boot Camp.

But seating is limited.  So, if the topic of fundraising is of interest to you – and you can get to Las Vegas on February 21st – RSVP TODAY.

(If the class is already full when you register, you’ll automatically be added to the waiting list)

* Psephology (pronounced see-follow-gee): The study of campaigns and elections