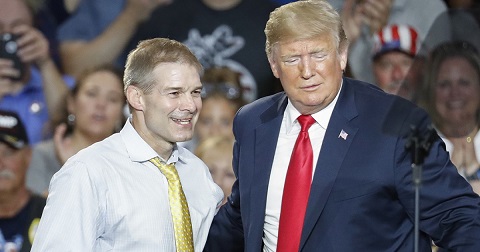 Sorry, ladies.  This one’s for the men.

In George Michael’s hit song, “Freedom,” there’s this line: “Sometimes the clothes do not make the man.”

More often than not, however, they do.

Rep. Jim Jordan (R-OH) has been in Congress since 2007.  He’s a staunch defender of Donald Trump and is a regular fixture on cable news shows defending the president.  And you almost NEVER see him wearing a suit or sports coat.

It’s his “schtick” you might say.  Makes him stand out from the inside-the-beltway suit-wearing crowd.  He’s different.  A “purple cow.”  It’s a very effective marketing tool for him.

“Dress for the part.  If you dress like a knowledgeable professional, people will assume your opinions and advice are credible.  That makes it easier to persuade.”

He added this later in the book…

“You never saw (Trump) dress casually during the campaign.  To do so would have removed some gravitas.  His shirt was always white, and his tie colors were always in the color palette of the American flag.”

The only exception I can recall is when he was photographed golfing.

In his own book on the subject, “Stone’s Rules,” veteran campaign strategist Roger Stone, a decidedly “sharp-dressed man,” wrote…

“If you are engaged in any business or profession, you are much more likely to succeed if you are well-dressed than if you are badly dressed.  An impression is made based on how you are dressed.”

“The color blue connotes authority.  A well-cut, dark blue suit is required for any public performance where credibility and authority are key.”

He notes that a charcoal grey suit is also acceptable.  And pin-stripes – as long as the stripes are narrow, not wide.  A blue blazer with grey slacks are about as casual as you want to get.

I hear a lot of political consultants tell their candidate to “dress down.”  Be casual.  Roll up your sleeves up.  Look like “a man of the people.”

Works for Jim Jeffords.  Probably won’t for you – especially if you’re not already in office.  Better to follow President Trump’s example.  He is, after all, the Master Persuader.

Ladies, if I come across similar attire advice that’s accurate and reliable I’ll be sure to pass it along in a future Campaign Hot Tips.  For now all I can say is, don’t dress like this…

P.S.  If you’re not yet a subscriber to my Psephology Today newsletter – conveniently delivered right to your door every month by your friendly neighborhood mailman (or woman) – you’re missing a TON of in-depth information that’ll get you more votes, more donors, more volunteers and more media coverage.

Click here for details and a very special LIMITED-TIME offer – including 50% off the subscription price and 10 FREE bonus “Special Reports” for new subscribers.

* Psephology (see-follow-gee): The study of campaigns and elections